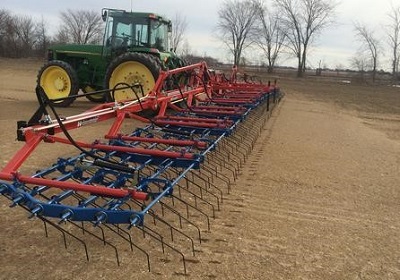 If you’re new to organic production, or are considering it, one of the biggest concerns you probably have is weed control. Without the use of herbicides, you may be wondering whether weed control is even possible.

While it does take a higher level of management, weed control in organic systems is possible. And you can get close to the same level of control as with conventional systems.

The key is to create a plan and implement the right tools and practices at the right time.

Getting a good start on weed control begins the fall before.

In organic systems, this means getting a cover crop seeded. Weeds like to grow in bare, uncovered soil. If you have bare soil, they’ll capitalize on that space. By seeding a cover crop, you can fill those voids and minimize the opportunity of having weeds pop up.

There are many plant species you can utilize as cover crops and can help with weed suppression, nitrogen building, and more. As the field operations manager for Rhea Brothers Farm in Nebraska, we’ve had success with cereal rye, radishes, field peas, and oats. In fact, oats will scavenge nitrogen in the top 2 inches of the soil, which that alone will help hold weeds back until you can get to your primary tillage to incorporate it as a green manure.

It’s even better if you can seed a cover crop that is allelopathic, such as cereal rye, as it will create a toxin in the soil, that hinders the germination of weeds.

Alfalfa is also allelopathic, which makes it a great crop to include in your rotation. We leverage alfalfa in our fields because of how well it reduces the weed pressure in our fields.

You also want to think about cropping rotations help your ability to manage weeds. The typical corn-soybean rotation can prove to be a challenging rotation in most organic systems as both crops have similar planting and harvesting cycles, which does not disrupt the weed cycle.  Additionally, organic soybeans can introduce weeds back into your fields as they are slower to canopy.  In general, soybeans are significantly trickier for when and how to use weed control implements.  For example, there is a big window when you cannot utilize a weed burner or other tools, which allows weeds to establish.

Small grains, on the other hand, are another good crop to include in your crop rotation because if you plant early and seed at a high rate, the crop will keep the ground covered. Then you can harvest the crop before any weeds in the field do go to seed, and immediately follow-up with an early seeded cover crop. A crop rotation with different harvest periods (i.e. with many small grains harvested in the summer) will help disrupt the normal weed cycle.  The earlier the cover crop is seeded, the faster it can germinate and get the ground covered.

In the spring, tillage implements and weed burners will be your primary tools for weed control.

It starts with either a rotary hoe or a tine weeder, both are the main tools for preventing weeds, as they remove weeds at the white root hair stage.   You’ll first use these tillage tools before the crop even comes up and will need to use it every 2-3 days to disturb the soil to prevent weeds from establishing.  Tine weeders also have a chance to remove very small visible weeds depending on soil conditions.

Both tools create minimal soil movement but are effective.

You can use either tool after your crop has emerged and it will fill the void before an in-row cultivator. Both the rotary hoe and tine weeder can be used through the early growth stages of your crop.

Next comes in-row cultivators, which can be used for both early and later crop growth stages. The first pass with an in-row cultivator should loosen the soil, while the next should throw soil towards the plant root base. As the season progresses, so should the aggressiveness of your cultivation.

Another tool that can be used for organic weed control is a weed burner. Using propane and a flame, it doesn’t technically burn the weeds, but heats the cell walls up so it causes internal “bleeding.” Eventually, weeds will dry up and die.

Weed burners can be set up as a broadcast, where it does the whole stand, or can be banded to protect the crop and target weeds.  Just like with herbicides, where the rates are dependent on weed growth height, the bigger the weed, the more propane you’ll need, while smaller ones require less dosage.

When used in combination with cultivation, we’ve seen almost 95% efficacy on control.

4. Be mindful of fertility

In addition to implementing the right tools and techniques at the right time, you can help prevent weeds by keeping your soil pH at the right level, as some weeds prefer more acidic or basic soils. You can correct your pH just as you can in conventional systems through ag lime or gypsum, if the products are naturally mined and approved by your certifier.

Another factor to consider is the source and type of your fertilizer. In organic farming, your main added fertility is manure-based.  If possible, try to incorporate composted manure vs. raw, as this will help reduce the chances of introducing new weed seeds into your soil.

The simplest and biggest mistake you can make with weed control in organic systems is to fall behind.    And once you get behind, it can be really hard to catch up.  As such, having a detailed field plan in place, including the time and flexibility to be in the field every 3 to 5 days for a cultivation pass, is critical.

Ultimately, there is no silver bullet to organic weed management — it’s a combination of building a diverse crop rotation that incorporates cover crops, using the tools you have available, and executing the right plan. A lot of people say organic weed control can’t be done, but it can. You just have to have the knowledge, a plan in place, and be ready to execute the plan.

If you are interested in learning more about organic weed management (or organic row crop production), schedule an call with AgriSecure to learn more about how we are helping farmers take advantage of the organic profit opportunity.