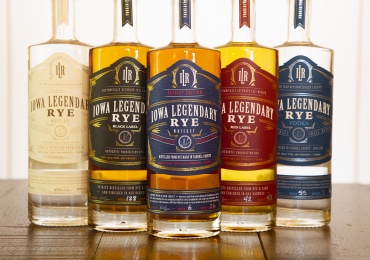 In Carroll County, Iowa — home of the original Templeton rye —  a distillery teamed up with a local organic farm to revive its Prohibition past.

The story of Iowa Legendary Rye dates back to the Great Depression. That’s when Lorine Sextro and her family housed a bootlegger in the attic on their Carroll County farm. To help support the family, Lorine learned how to distill small batch rye.

Despite a close call with the Feds, the Sextros were never caught. And Lorine kept her rye recipe a secret until 1989 when she shared it with a family friend.

Fast forward to 2015 and Iowa Legendary Rye is born. Using Lorine’s 1932 recipe, the rye is distilled in 26-gallon barrels and aged in 15-gallon barrels, just like Lorine did it. After eight decades, they sold their first legally distilled bottle.

Now Iowa Legendary Rye is taking the quality of its historic liquors to a new level. The distillery has partnered with B&B Irlbeck Farms to make 100% organic rye and vodka. B&B Irlbeck received certification on its rye this past summer. The distillery plans to sell its first organic bottles in early 2021.

Iowa Legendary Rye’s partnership with the Irlbecks originated when the distillery was just getting started.

About seven years ago, B&B Irlbeck Farms was looking for ways to diversify their crop rotation. They wanted to grow cereal rye to incorporate more cover crops, but they didn’t have a buyer. Luckily, Bryce lrlbeck, AgriSecure founder and owner of B&B Irlbeck Farms, learned about Iowa Legendary Rye. He reached out about working together and the rest, as they say, is history.

While they didn’t plan on it, the partnership pushed both parties toward organic.

“We sped up our organic learning curve,” Bryce says. “We figured out how to manage rotations. And how to build relationships with end users that not only produce specialty products, but need to be able to show that their ingredients comply with organic farming practices. It showed us the value organic rye and other crops can bring to a farm.”

“It doesn’t matter if it’s organic or regenerative or non-GMO. It creates a lot of value when you have systems set up on your farm that let you provide what end users want,” Bryce says.

He believes the grain is already top quality because it’s grown on some of the richest topsoil in the world. “We think it lends incredible depth to our flavor profile,” he says. “The grain actually takes on the characteristics of the soil.”

That means the distillery uses “organic, purpose-grown grain.” But they don’t use any chemicals to distill it. Instead, they rely on a long, slow, fermentation process like they did in the ’30s. Heath says this results in a product that not only stands out in taste but also in its aftereffects.

In fact, Heath became involved not due to the family connection, but because of how he felt after consuming the liquor. “Or better yet, how I didn’t feel,” he says.

Most modern day distilleries ferment in a matter of hours. Iowa Legendary Rye, on the other hand, takes anywhere from 14-21 days. Heath believes this original, organic process is a key reason he doesn’t suffer the ill effects that can come with drinking other mass-produced alcohols.

Heath also believes that becoming organic will continue to set the distillery apart from other brands. It’s simply what consumers want.

“When I go out and do tasting events, and we describe what we’re doing and why we do it, it hits home with consumers,” he says. “Consumers believe in local grains, organic processes. The whole experience is being embraced by the market.”

Both national and international buyers have already asked Iowa Legendary Rye if they’re certified organic, he adds, so there’s no doubt the demand is there.

Heath says getting certified organic now will also give Iowa Legendary Rye a competitive advantage over other distilleries. In particular, it helps them compete with the big conglomerates.

The organic certification process for distilleries is much faster than it is for farmers. Still, it requires an established routine where organic ingredients and products never intermingle with non-organic.

And while the distillery’s goal is to become 100% organic, they’ll have to go through a transition process to get there. That’s because they have barrel-aged products, which will take 2-4 years to be certified. Their white rye and vodka, which aren’t aged in barrels, will be the first products certified in 2021.

Local organic relationships are a win-win

The fact that B&B Irlbeck Farms is only 10 miles from the factory has been a huge advantage to both parties. Of course, being so close simplifies delivering the organic rye and provides a time savings benefit. The other significant benefit is the ability to create a personal relationship.

“We can go to the farm. We can see and touch the crop in the field,” Heath says. “It’s exciting to see nature at work, to see your organic rye growing out of the ground.”

“The story, the history, the products. They all come from that little place in Carroll County, Iowa. It was just a beacon in the night when Prohibition went into effect,” Heath says. “We just think it’s fantastic we can keep our history true and keep it in Carroll County and work with the Irlbeck family.”

The time to look for local opportunities is now

None of this would have happened if the Irlbecks hadn’t reached out to Iowa Legendary Rye. Heath and Bryce encourage organic farmers as well as small businesses looking for organic ingredients to seek out potential partners in their areas.

“Don’t hesitate to reach out to people,” Bryce says. “You never know what they’re going to say. They might turn you down, but they might not. It’s always worth a try.”

Heath agrees. He advises organic farmers to pick up the phone or send out an email sharing their story. Many farms probably have something special to offer, but don’t realize its value to the market. Organic is a great selling point. And it can be enhanced when farms can link it to local and family history.

And he believes the time to do this is now.

“I truly believe we’re in the cusp of a food evolution,” he says. “People are going to demand their products come from local, organic farmers. They want liquor distilled from organic rye. But that’s not all they want. This is chance for organic farmers to get ahead of the game and create a local supply chain. So when the time comes, they’re in the perfect spot. And they’re ready.”

You don’t have to go it alone. AgriSecure can help.

Want to gain an edge by becoming an organic farmer? Already an organic farmer but need help finding the best market to sell your crops? We can help. AgriSecure’s team can guide you toward a successful and profitable future with organic row crops. Contact us for a free consultation — call today.