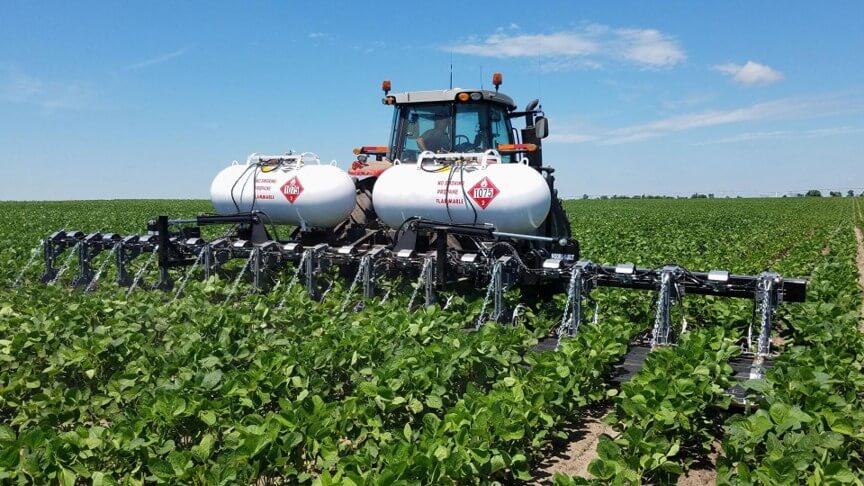 Many farmers believe modern ag technology doesn’t apply to organic production. And there is some truth to that. Many organic farmers have small, 40-acre operations where technology isn’t used.

But for large-scale organic row-crop operations, a lot of the technology used on conventional farms can still be utilized, and often will result in a higher value proposition due to organic’s premium pricing and higher labor needs.

Data collection and analysis technologies can offer tremendous value for organic farmers. Organic producers must collect a lot of data for the certification process, and that data can create valuable information to understand the profitability of a system on a field-by-field, crop-by-crop basis.

Data analysis typically provides an even higher value for organic farmers because of the price premiums. If data from yield maps, for example, helps a farmer increase yield by a few bushels, the impact on the bottom line will be much higher for the organic farmer with $9 corn than it would be for a conventional farmer with $3.50 corn.

On our farm, we utilize CropZilla software to track the efficiency of our equipment, and it’s really helped us identify some major savings and efficiencies. We’re actually switching some of the land we rent because we’ve identified that under an organic system, some of these fields are too expensive to operate because of poor field efficiency. – too much time is spent turning around and overlapping on terraces, and too many point rows that zap productivity due to cultivator blight. We knew these fields were suboptimal, but getting the hard data behind the costs was eye-opening.

When collecting data in organics, it’s important to be aware of whether that data will lead to better decision making. For example, there are a lot of interesting things you can observe from crop imagery, but in an organic system, once we’ve put the seed in the ground and done some weed control, there isn’t a lot management changes we can make later in the season like a conventional grower could. It’s one thing to know something, and it’s another to be able to do something about it.

Most modern row-crop technologies used in conventional farming can also be used in organics. Precision planting is one such technology and may hold even higher value for organic production, because without the use of seed treatments, being able to place seed accurately is key for helping the organic crop achieve the uniform stand and quick canopy that’s necessary for a successful season.

Organic farming can also utilize variable-rate fertilizing and planting. While variable-rate fertilizing isn’t as precise in organic as it is in conventional due to limited fertility options and dealing with macro sources like manure, it can still help solve some basic soil issues like pH. Again, this technology will have a bigger impact to the profitability of an organic farm than it would on a conventional one.

GPS guidance and other technologies that improve farming efficiencies are also key to the success of large-scale organic production. Since organic farming is very labor intensive and agriculture has a brutally tight labor market, any technology that can increase efficiency — by reducing overlaps and getting more acres completed per hour — will not only reduce labor needs but ensure work is accomplished when necessary, which is often during narrow time windows.

Much of the fieldwork involved in organics is for weed control, but fortunately there are technologies that make this easier to manage.

One of which is optical guidance for cultivation. Optical guidance uses solid state cameras to find the crop row to the millimeter and keep the cultivator where it needs to be, allowing the operator to get 2-3 inches closer to the row without risk of accidentally taking out the crop. It also reduces operator fatigue, which improves labor efficiency.

Another weed control technology are propane flamers. While technically an older technology — they were used before herbicides existed — today they’re much safer and more efficient, and can be used to get across a large number of acres to clean out weeds in between the crop rows. There are also electric weed zappers, which use a several-thousand volt system to fry weeds that escape the crop canopy.

While there is plenty of technology available on the market today to make large-scale organic production possible, we anticipate even more coming down the pipeline that will make organics easier and more efficient.

One such technology is weeding robots, which use optical sensors to detect weeds and remove them manually. Not only would this improve weed control, it would reduce the amount of tillage currently necessary in organics, which would increase the sustainability of the system.

Another exciting upcoming technology are autonomous cover crop seeders. Cover crops are key in organics for building soil health and controlling weeds in the spring, but trying to scare up labor to get them seeded during harvest is often a challenge. With an autonomous seeder following the combine, you’d eliminate the need for an additional person while ensuring the task gets completed.

On the data side, we expect to see more traceability technologies. With consumers wanting more information on where their food comes from, a company’s brand is only worth how solid their supply system is. AgriSecure currently offers data tracking, which shows the step-by-step process of how a crop went from field to its delivery point. But we also anticipate tracer technology being used in the future, which would allow companies to confirm through genetic testing a crop’s origin.

This technology would not only protect the integrity of organic food and consumer demand for it, but may offer organic farmers an opportunity to market their crops in a unique way by collaborating with food companies to develop specialized products.

While there are a lot of great technologies out there that can help organic farmers, at the end of the day it’s important to remember that organics is still about execution. Technology makes it easier to accomplish those things, but it is not what drives the success of an organic farm. Just like in any farming system, technology isn’t going to be what makes you a good farmer — but as long as you can clearly track and understand a technology’s value proposition, it can support you and help make you be a better one.