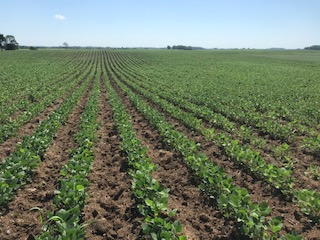 When Rusty Olson saw that the farm economy was “sliding sideways,” he started looking for opportunities to bring in more revenue from the farm.

A fifth-generation farmer in Garner, Iowa, he had recently achieved his goal of expanding the family corn-and-soybean operation from 1,000 acres to 2,000. He wanted to focus on the farm and didn’t have the capacity to continue doing off-farm work, which had included managing hog confinements, building and moving grain bins, and running a commercial lawn mowing business. So he looked to their hog manure.

His family, which owns two century farms and had raised pure-bred Duroc boars for nearly 100 years, stopped raising boars before Rusty returned to the farm from Iowa State University and had sold land to a hog confinement, primarily for access to the manure. By the time Rusty was farming full-time (his brother works in town full-time and farms part-time and his father is working toward retirement) they were up to three hog confinements on their land.

He knew their hog manure gave them a great opportunity to get into organics, but he was hesitant to pursue it for multiple reasons, including weed control, the paperwork involved, and what his neighbors might think.

That was until he attended a Farmers Business Network (FBN) meeting and heard AgriSecure Founder and organic farmer J.P. Rhea speak. Realizing there were people who could help him navigate this process, he set up an appointment with AgriSecure.

After his discussion with AgriSecure, and visiting with successful organic farmers in a neighboring county, Rusty decided to move forward into organics, explaining that his decision for doing so is a business one that he believes will bring long-term sustainability. The fact that it can also help the soil and environment are added benefits.

“I’m looking at it as this is one more step in my operation to sustain profitability, year after year,” he says. “I want sustainability in my operation, long term. I want to make sure there’s something there to give my children when I’m gone.”

Rusty started this year with 200 acres in transition — 25 in alfalfa and oats, and the rest in corn — as well as 40 acres organically certified soybeans, as he was able to skip the transition period on land coming out of CRP.

He may also have another 100 acres in transition soon, as he had to take prevent plant on a field this year due to the wet spring. He seeded his prevent plant acres with a cover crop of oats to protect the soil and control weeds, and because he didn’t apply any prohibited substances, he’s already one year into the transition process. Since that field also has some tile issues, Rusty is thinking he may fix the tile and put another oat or alfalfa crop on it, giving him a second year of transition. If all goes according to plan, he’ll then have 340 acres of certified organic corn in 2021.

So far he’s impressed with the 200 acres he’s transitioning. The field of oats and alfalfa is clean and beautiful, he says, and the corn looks phenomenal, adding that the fields are relatively weed-free and he thinks it’ll break 190-bushel yield.

While weeds were one of the biggest fears he had about getting into organics, he followed AgriSecure’s advice on what tillage to do, when to do it, and how frequently.

“I did everything they told me to do and everything just worked,” he says, explaining that he had to invest in a rotary hoe and cultivator, and his neighbor gave him an old 60-foot drag.

But one piece of equipment he wishes he had sooner was a weed flamer for his organic soybeans. While he understands that weeds are a bigger challenge in soybeans, he would like to see the field be cleaner. This drove him to invest in building his own weed flamer, which he hopes will help with next year’s crop.

“I can definitely see the usefulness of that tool,” he says. “If I can get out there at V5 on corn and get the weeds when they’re small, it has the same effect as spraying glyphosate or other post-emerge chemicals. If you can run it when they’re small, you can smoke them, and then once the corn starts to produce its canopy, it shades over the rows and basically stops weed growth.”

Another tool that has been helpful to Rusty is AgriSecure’s MyFarm platform.

“One thing about organics you learn is that the paperwork is excruciatingly painful compared to conventional farming,” he says.

But with the MyFarm app, he’s able to check things off on his phone or iPad, making record-keeping a convenient process.

“You can go back in the records and show the certifier that this is how everything was done,” he says. “There’s no disputing the fact that it was done on this date, at this time, in this field. It’s a very solid platform and works very well.”

FBN is also still useful in organic production. First, FBN sells organic inputs, which brings Rusty peace of mind to know that if he ever needs a fungicide or insecticide, he can quickly get them at an affordable price.

He also worked with FBN Crop Insurance to get organic crop insurance and was impressed with their agents, saying that “they’re knowledgeable on organics and made the transition process very smooth.”

Rusty’s advice to other farmers who are considering organics is not to fear trying something new — regardless of what the neighbors might think — especially if they have a partner like AgriSecure to help them through the process.

In fact, now that Rusty’s almost done with his first season of growing crops organically, he says he wouldn’t consider trying to do this without AgriSecure. While farmers can attempt to get into organics on their own, he says the company is a very valuable asset.

“They walk you through every step of the process for getting certified. They made the certification process on my 40 acres basically seamless,” Rusty says. “They were with me at the meeting with the certifier, helping me with the documents, had everything in the place. They helped me get my cost-share done with the USDA. They know what they’re doing and they’re there to help you.”